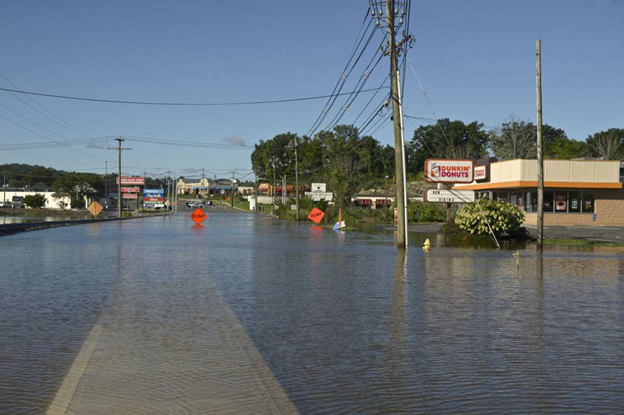 Newtown Road is blocked by overflowing water from Limekiln Brook in Danbury. Remnants of hurricane Ida brought heavy rain and winds greater than expected by some to the Danbury area, leaving some without power and closing and delaying some school districts. Thursday, September 2, 2021. In Danbury, Conn. H John Voorhees III / Hearst Connecticut Media file photo

It was a rain sandwich year — dry and crusty in January and December with a juicy summer in the middle.

“You can see the pattern,” said Matt Spies of Brookfield, state coordinator for CoCoRaHS, the Community Collaborative Rain, Hail and Snow Network, of the alternating months of dry and wet weather we had this year.

Cumulative, it was an average year for precipitation, Spies said — about 48 inches.

But what will make 2021’s weather remarkable is that wet summer. The remnants of four tropical storms hit Connecticut in the space of two months — Elsa in July, Fred and Henri in August and Ida in early September.

But maybe, also, a sign of things to come.

Vallee, who has lived in southern New England all his life and whose center studies the impact of precipitation on rivers and streams, spoke this month at the annual meeting of the Housatonic Valley Association.

His presentation is at www.youtube.com/watch?v=bqUJHuNHrlc

A warming climate is producing a smaller, thinning Arctic ice pack, Vallee said. That smaller ice pack means that less heat gets reflected away from the earth.

That, in turn is altering the jet stream — the river of air flowing west to east across North America.

This altered stream is now carrying slower-moving storms and blocked weather patterns, Vallee said. That’s what produced the extended drought in Connecticut in 2015-16.

It’s also getting hotter. Looking at weather records from 1930 to 2020, Vallee said the 12 warmest years on record in southern New England all occurred since 1990.

Winters are getting warmer as well — Vallee said the coldest winter in the past 40 years was still warmer than the average winter temperatures in the decades preceding it.

By warming the atmosphere, climate change is also making it more moisture-laden.

That, combined with the sluggish jet stream, means that when storms gather, they’ll be longer, slower-moving, more intense. The annual precipitation is increasing, as well as the number of big storms. This will bring more summer flooding and wildly varying snowfalls in winter.

That will, in turn, bring changes across the environment.

“It means changes in vegetation, in bird life, in light, in insects,” Vallee said.

The problem is that the infrastructure we built around streams and rivers was built for the weather of the 1950s, Vallee said.

Some infrastructure — like the series of flood dams on the Naugatuck River — still work well, Vallee said. Others are having trouble handling the slower-moving, more intense, more frequent storms of today. There’s more flooding in store.

“The most potent is the first flush after a dry spell,” Jastremski said.

Lynn Werner, the HVA’s executive director, said the association is now focusing on the changes a warming climate brings.

It is working collaboratively with towns in the region to replace aging, outmoded culverts throughout the region with more modern ones designed for the water capacities they may have to handle in the future.

These new culverts allow streams and rivers to flow without blockages and flooding. They also mean less erosion, a better, cooler habitat for fish, and a clearer path for animals moving along streambeds.

Likewise, the HVA’s Follow the Forest program is looking for ways to connect large, protected forest parcels with others. Animals and birds may have to migrate to different habitats — north and south — as climate change alters ecosystems. Having these connections will allow species safer passage to make those moves.

Werner said green infrastructure, rain gardens and planting naïve species along stream beds will aid these changes. Some communities may also have to find ways to restore river floodplains.

“Everything we’re doing now is to build resilience for the next 15-20 years,” she said.