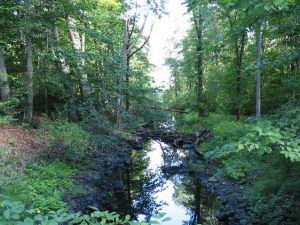 The Housatonic Valley Association (HVA) has been awarded a significant grant from the New York State Department of Environmental Conservation (NYSDEC) that will allow the organization and its partners to plant thousands of native trees and shrubs along riverbanks. The plantings will protect water quality, provide wildlife habitat, and help stabilize banks against erosion and flooding.

“HVA is thankful to the NY State Department of Environmental Conservation for their funding of this very important initiative,” said Michael Jastremski, HVA Watershed Conservation Director. “We’re looking forward to planting season in 2019 and a long future of cleaner, cooler waters for our communities to enjoy.”

Riparian (streamside) buffers are critical to maintaining healthy streams and water. These buffers, made up of trees, shrubs, and grasses, help to reduce pollution entering waterways by slowing down and filtering runoff.  Buffers also help to reduce flooding and erosion by stabilizing banks and absorbing high velocity flows following heavy rainstorms and seasonal snowmelt. Riparian buffers also serve an important role for wildlife – improving both in-stream and stream side habitat and increasing biodiversity.

Funding will restore riparian buffers at two restoration sites –on the Wells Brook adjacent to Route 22 in Dover and a site adjacent to the Austerlitz Historical Society on the Green River in Austerlitz, NY. All told, these projects will install 3.100 native trees, plants and shrubs to restore approximately 5.5 acres of riparian buffer. Each of these projects will provide opportunities for engaging volunteers and the general public.

Project partners include, among others, the Austerlitz Historical Society and private landowners along the rivers.

Since 2014, Housatonic Valley Association (HVA) has served as the local coordinator for the New York State Department of Environmental Conservation’s (NYSDEC) Trees for Tribs program in the Ten Mile River watershed, which has provided free native plants and other materials for riparian restoration projects. HVA has already installed riparian plantings on Wells Brook in Dover Plains, NY, on a tributary of Webatuck Creek at the Amenia Town Hall, and on private property adjacent to the Ten Mile River in Dover, NY.  In total, HVA has already installed almost 2,000 plants and restored over 4 acres of riparian area in the Ten Mile River watershed.

About NYSDEC “Trees for Tribs”
Since 2007, New York State’s Trees for Tribs Program has been working to reforest New York’s tributaries, or small creeks and streams, which flow into and feed larger rivers and lakes. The goal of the program is to plant young trees and shrubs along stream corridors, also known as riparian areas, in order to prevent erosion, increase flood water retention, improve wildlife and stream habitat, as well as protect water quality. Trees for Tribs has engaged more than 8,751 volunteers in planting more than 101,416 trees and shrubs at 614 sites across New York State. Learn more at https://www.dec.ny.gov/animals/77710.html