A stretch of the Housatonic River winds through Lenox

On Nov. 5, the U.S. House of Representatives passed the historic Infrastructure Investment and Jobs Act (IIJA), which includes $550 billion in infrastructure funding that addresses conservation and sportfishing. These investments will create jobs, conserve the aquatic environment and preserve one of our nation’s most cherished pastimes. After passing the Senate earlier this year, the bill now heads to the desk of President Biden, who is expected to sign it into law.

“These investments in fisheries conservation and access reflect the growing recognition among policymakers that outdoor recreation in general, and recreational fishing specifically, is a major economic driver,” said Mike Leonard, the American Sportfishing Association’s (ASA) Vice President of Government Affairs.

The act includes provisions that directly benefit anglers including the reauthorization of the Sport Fish Restoration and Boating Trust Fund. Funded in part by the federal excise tax on fishing equipment, the trust fund is the backbone of state-based aquatic resource conservation, benefitting all U.S. states and territories.

The bill also authorizes $1 billion for the National Culvert Removal, Replacement and Restoration Program, a landmark program that will address challenges with hundreds of culverts around the country that block upstream migrations of anadromous fish such as salmon, steelhead and sturgeon. It will substantially invest in culvert restoration and benefit recreational fishing opportunities that are dependent on anadromous fish passage and recovery efforts.

Other provisions in the Infrastructure Investment and Jobs Act include:

A game-changer for wildlife 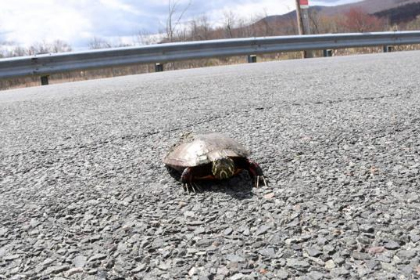 This painted turtle made it safely across Sloan Road in Williamstown near the Field Farm reservation earlier this fall. With the IIJA, for the first time in United States history, there will be dedicated federal funding for wildlife crossings.

That’s according to the Wildlands Network. For the first time in United States history, there will be dedicated federal funding for wildlife crossings. The complete (IIJA), just passed by Congress is a vast collection of national infrastructure programs and spending measures designed to bring buildings, bridges, roads, water delivery systems and other infrastructure up to date and more resilient to the impacts of climate change here in the United States. The IIJA contains $350 million in federal funding for a “Wildlife Crossings Pilot Program” to reduce wildlife-vehicle collisions — these hotspots contribute to the death of millions of animals annually, as well as hazardous and sometimes deadly conditions for drivers.

“This is great news,” says Berkshire Environmental Action Team president, Jane Winn. “BEAT works alongside many organizations to make it safer for wildlife to cross roads. We have partnered with The Housatonic Valley Association and the Hoosac River Watershed Association (HooRWA) in surveying stream crossings in Berkshire County.”

The Taconic Chapter of Trout Unlimited and the Mass. Division of Environmental Restoration have also been quite heavily involved in stream crossing projects over the years.

“The information is collected in a North Atlantic Aquatic Connectivity Collaborative database where everyone can view it — including environmental advocates, town and regional planners, and transportation designers including MassDOT (Massachusetts Department of Transportation.) Now every road construction project that involves a road-stream crossing becomes an opportunity for improvement for wildlife movement, habitat connectivity, and public safety,” said Winn. “Well-designed stream crossings allow wildlife to move, meeting their daily, seasonal and dispersal needs which is especially important in this time of climate change.”